That’s the question I was asked this morning by a friend who noticed I had been to the last 4 or 5 of these events.  Collaboration Kitchen is an irregular pop-up dinner that takes place on random Sunday evenings in the depths of an active seafood processing facility.  Some in the San Diego area might argue that it is “The” seafood processing facility – Catalina Offshore Products, owned by Dave Rudie, an old-time Uni (sea urchin) diver with Tommy Gomes, an old-time everything else, as the public face of the operation. So, Why?  It’s not because the food is really good.  It is.  It’s also different, put out by a seemingly endless lineup of talented local chefs at each event.  It’s served in paper bowls, but that’s the biggest con job in town.  There’s nothing cheap or off the cuff about this event.  It’s actually a sophisticated production which is perhaps one of the most exclusive tickets to a great meal and dinner show in San Diego.  Witness in the picture above the Camp Chef and Specialty Produce sponsor’s banners, complete with cooking equipment and about $200 dollars worth of fresh produce displayed on the tables for decoration, along with the 65 inch LED screen showing close up shots of the meal preparation with a full sound set up.  These guys are about as unsophisticated as the Clampett clan of Beverly Hills, going on seven years of existence as a non-profit organization and nary an empty seat in the house at any event.

I keep coming back because it reminds me of the good ol’ days.  The military days, the martial arts days, the shooting and archery days, the contractor charity build days.  Days when there was the opportunity to work, sweat, bleed and drop the occasional f-bomb with a bunch of people who were thinking more or less the same thing and who were all-in – donating their time, skill, labor and families to a common pursuit.  It’s the type of esprit de corps, cooperation and deep, soul filling satisfaction that can only be understood if it’s experienced.  You can’t read about it or watch it.  You’ve got to be a part of it. 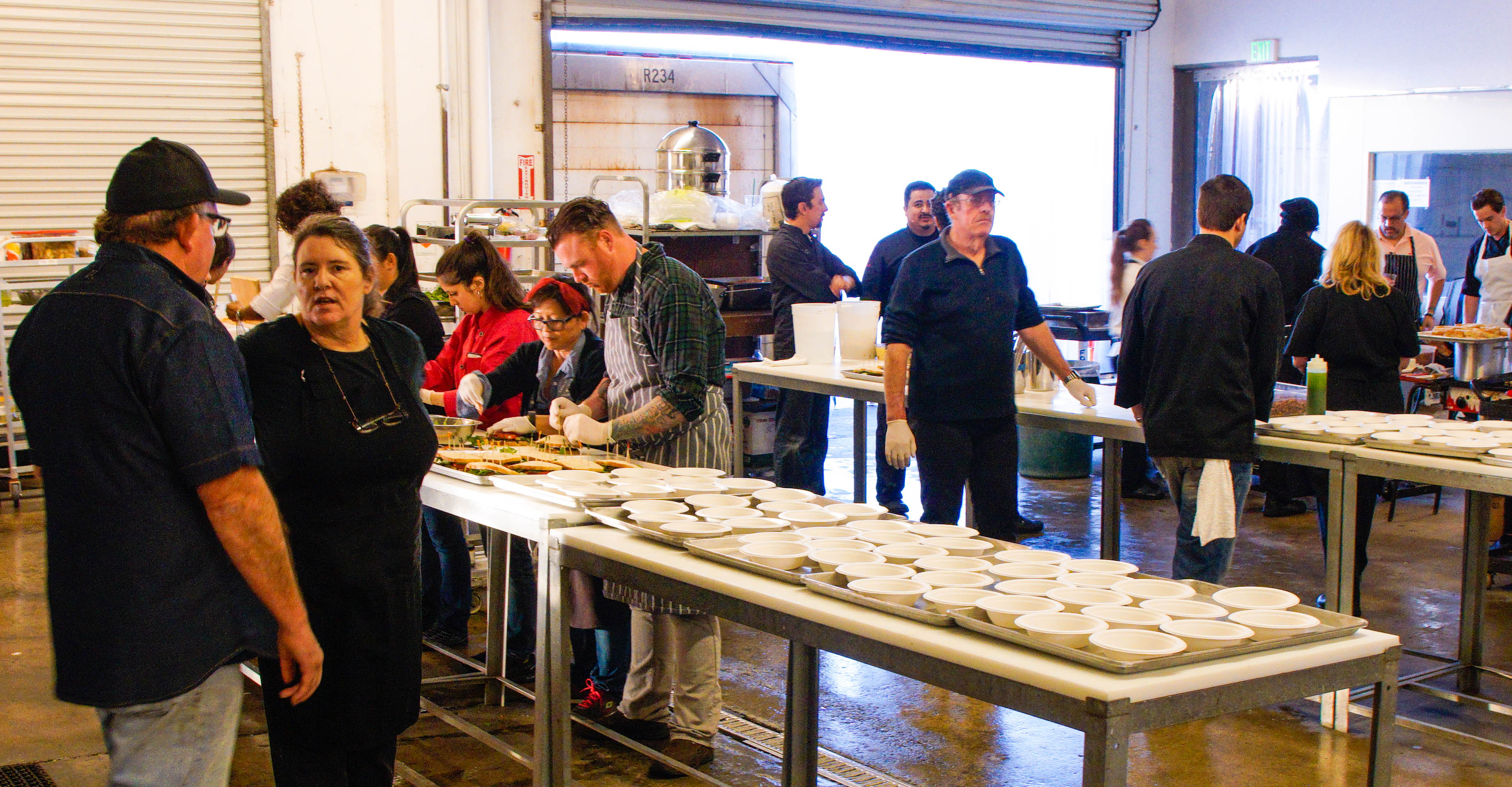 Money?  Yep.  You’re gonna pay to get in.  It’s a whopping $65 if you’re lucky enough to get a ticket before they sell out.  But, that’s the interesting thing.  These events are only about the money as a tool to accomplish what they’re trying to accomplish.  Since I’ve been attending events, CK has donated checks toward a charitable organization that feeds homeless veterans, a kidney replacement for a special member of the food community and, this event, dedicated to the Chef Celebration foundation, a non-profit organization of over 20 years that provides scholarships for aspiring young chefs to attend an intensive training course at the Culinary Institute of America in Napa.

Food offerings at these events would be spectacular coming out of a well stocked kitchen in a professional restaurant.  They are simply unbelievable when being prepared on camp stoves and plated in the back of a fish warehouse.  From English Pea tortellini and a “take” on clam chowder with Venus clams and Salsify puree to Opah pastrami and bacon, there is no lack of diversity, flavor, skill, creativity or care taken to provide the supporters of the event a great meal in a comfortable, casual and chill location.  Beer pairings were also provided for each course on this evening, but depending on the lineup, wine can find itself on the menu as well.

Yes, that’s a guy holding a fish in one hand and a microphone in another.  Dan Nattrass is the resident comic foil for the event, always across the room from Tommy so that banter between the two can fly back and forth over the heads of the crowd.  Getting a seat in the path of this trainwreck is like sitting under a volleyball net – it’s all fun and games until something or someone lands in your lap or pokes an eye out.  Don’t ask about the fish.  I don’t remember.  I might have blocked it out.

Bottom line here – it’s about the people on the line and in the trenches, the ones that work when the rest of us are playing – sourcing, prepping and cooking the fine meals that we brag about eating to our friends and family.  The attendees pay the bill, gladly, for a seat to one of the best shows in town, not to mention some pretty good chow. Good enough so that most of the foodies and eaters that attend this event are regulars and easily detected by the cushions and coolers full of wine that they tote in at each event.  They don’t mind spending their money here whenever possible, probably because it’s cheaper than a dinner out at the finer restaurants in town and, truth be told, better than most.

Collaboration Kitchen – subscribe to their Facebook page.  It’s pretty much the only way they announce their events.  $65 gets you more food than you can eat, beer or wine pairings, a great comedy show, a cooking lesson and a feeling like you were part of something special.

Chef’s Celebration – The recipient of the proceeds from the latest event and a pretty spectacular organization itself.  Going on 20 years, they hold weekly dinners throughout the month of April at different restaurants around town with the collaboration of many of the better chefs in town.  All proceeds from these events go toward sending young, aspiring chefs to the Culinary Institute of America in Napa for an intensive, targeted training program designed specifically for this group.  This year, there are six dinners, all on Tuesday evenings, beginning the last weekend of March and extending into early May.

These tickets won’t last long, either – just my opinion, but I might be right this once.  Get ’em while the gettin’s good and, Cheers, my friends!

Previous Post: « Ono Yum’s Farm to Turntable – Cool, Slick and Tasty
Next Post: **Video** Clean your Crab and Spice it Up at Home! »