Writing about a food event that has already happened is kinda like trying to stuff the feathers back into a busted pillow.   The event is a memory, the food is gone…what’s the point?  However, some events are good enough to 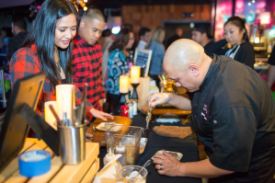 not only merit the effort of being chronicled, but conjure up desire that said article might be considered an affirmative vote for another event.  Such is the case for Ono Yum‘s Farm to Turntable on a recent, past, wintry evening, hopefully the first in what might promise to be a spectacular series.

This event took place at Fluxx nightclub in San Diego.   It initially tweaked my interest because I’ve spent portions of a few evenings sitting with friends on the patio of the Palace Bar across the street, sipping scotch, rye and bourbon while enjoying and chuckling at the sheer foolishness of the nightclub scene that I haven’t been a part of since last century. People falling over drunk (and/or stupid), dresses shorter than my socks, roving gangs of dudes that think they’re cool working on matching gaggles of chicks that hope they’re hot.  Seriously, it’s great people watching on a Friday and Saturday night, but…

…I digress.  The “real” reason I attended is that there’s always something about the 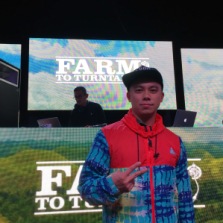 events (including I Love Poke Festivals in San Diego, Orange County and Seattle as well as North Eats) put on by Ono Yum and founder Nino “Neens” Camilo that set them apart from the seemingly never-ending litany of food contests and events that can be found throughout San Diego pretty much any night of the week.  Ono Yum’s themes are always clear and solid.  Since their events often focus on Pacific/Asian cuisine, which some would argue is the one of the basic “mother sauces” for great bordering on exotic food in our region, it’s not really a stretch for most food lovers in SoCal to get their head around the flavors at these events.   The people that attend are always excited and energetic.  There’s a confidence in the attendees, perhaps borne of the complete and effective communications that stream out to the public about what to expect at these events. 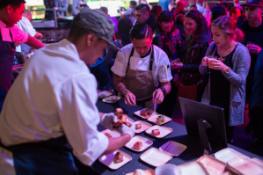 The food, naturally the centerpiece at any food-centric event, always seems to be elevated – more of a complete course on a small plate than a tasting. The worst offering at an OnoYum event rivals the best offerings at some lesser thought out mashups.  Lines move fast, mostly because there are plenty of things to see and do and plenty of space at these events to get out of the fray, if needed.  Most of all, and I think this is at least partially due to the caliber of chefs that Neens and Ono Yum attract to their events, people are respectful of one another.  There’s no elbowing, shoving, snarkiness or pretentiousness present, only an air of assurance about the throng that the food will be great and there will be plenty of it.  Anxiousness to be first in line is trumped by the poised certainty that the last plate served will be as good as the first.

This first Farm to Turntable event focused on Filipino

food combined with hip hop music. Why?  Ono Yum’s website says it best – “The Filipino culture is known for family gatherings by the hundreds, with lots of food, a DJ (and most likely some dancing).  So we’ve taken the party out of the garage and into Fluxx Nightclub in San Diego.”

As an interloper who married 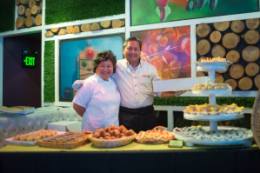 into a Filipino family, I’m pretty familiar with these types of gatherings and flavors after partaking for the past 25  years or so. I’m not going to say I’m in love with all of them (gatherings, maybe, traditional flavors, no), but I’m familiar with them. However, aside from a knowledge of lumpia and pancit which are the most common and palatable dishes shared at public parties and gatherings, most would not recognize these flavors or go out of the way to search them out.  In its native clothing Filipino cuisine is extremely regional (a result of taking advantage of the ingredients at hand) and not widely familiar outside of the family events where the dishes go back generations.

This event turned my perception of traditional Filipino food upside down, 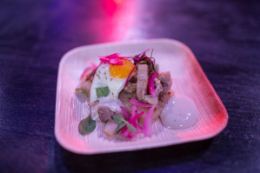 something I would never have guessed was possible.  Some of the top chefs in the county came together and served what turned out to be an amazing, modern panoply of flavors, leaving no doubt that the tastes and sensations of the old school were definitive and present, while turning up the 21st century in the offerings – brightening, lightening and tightening the flavor profiles and presentations so that an entirely new generation of those in and out of “the know” 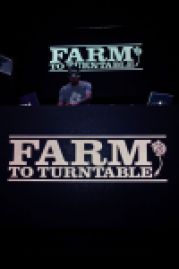 could experience flavor combinations that may never before have been considered.

Melded with the light show and hip-hop music that was masterfully selected to be “boppy” enough to establish a rhythm for the evening but not loud or intrusive enough to overwhelm the food or conversation, this event can be chalked up as a winner.  As a trial run, it was a runaway success.  Every ounce of me believes that San Diego is ready for at least a series if not a regular run of these events.  Doing my part to make it happen…Cheers, my friends!

Giovanni Gottiano The Patio on Lamont

Photo Credit to Ron Pareja @ronpareja for taking some incredible pictures despite the nightclub lighting!

Previous Post: « The Whet Noodle – Soon to Be Your Favorite Noodle House!
Next Post: Collaboration Kitchen – Why do I keep attending these? »