Back when I was first old enough to go into bars (sometime deep into the last century), I remember them as being a bit seedy, with free food out for the patrons during happy hour.  It wasn’t great food, usually sandwich fixin’s, but it was good enough to fill you up and make you thirsty so that you could order more to drink.  Things have changed a lot in the bar scene since then.

Today’s  bar scene has craft cocktails, emphases on fine wines and craft beers, a younger, hipper crowd and beautifully appointed interiors.  Cueva Bar on Adams Avenue in San Diego, run by Chef Oz, who is pouring wine in this picture, is pretty much the definition of the modern bar.  Add to the mix a latin fusion tapas menu that, while not free, is very reasonably priced and superbly executed and you have a neighborhood hangout that makes for a great place to wrap up a work week and ease into the weekend.

A few notes — they are a wine and beer bar only (try the sangria, it is more of a spiced wine than a fruity concoction, but very nicely done) and parking may be a bit of a challenge — we parked about a block away in a residential neighborhood, which made for a nice walk to and from the establishment.  The wine list is small, but varied.  It contains wines from Spain, France, Chile, Central Coast and Oregon.  They also serve a great Michelada (Beer with lime and chile powder).

There are quite a few vegetarian, vegan and gluten free offerings on the menu.  In fact, Corey, our server, told us that about once a week, Chef Oz does a Chef’s Special Vegan night.

These are the Dragonas – pan sautÃ©ed Kalamata olives coated in a medium spicy chile sauce.  Hot olives were a first for me and they were spectacular — juicy with the natural tartness and oils activated to peak flavor by the saute.  I pretty much picked at these all evening and used them as an accent to some of the other dishes.

The Papa Asplatada is a smashed red boiled potato covered in an olive tapenade and drizzled with Balsamic vinegar and olive oil.  If you’ll look closely at the menu when ordering, you will notice there is an “extras” column that offers sides or add-ons like egg, bacon, chorizo, brisket, chicken and several others.  In other words, you can convert any of the veggie offerings to a full meatlovers delight if you so choose.

The goat cheese and bacon stuffed dates in spicy chile oil were like a savory candy.  They had a nice density that gave the dish some body without being chewy.   We found the chile oil was pretty consistent with a nice medium spiciness throughout all of the offerings it was served on, yet it provided a different experience on every dish. 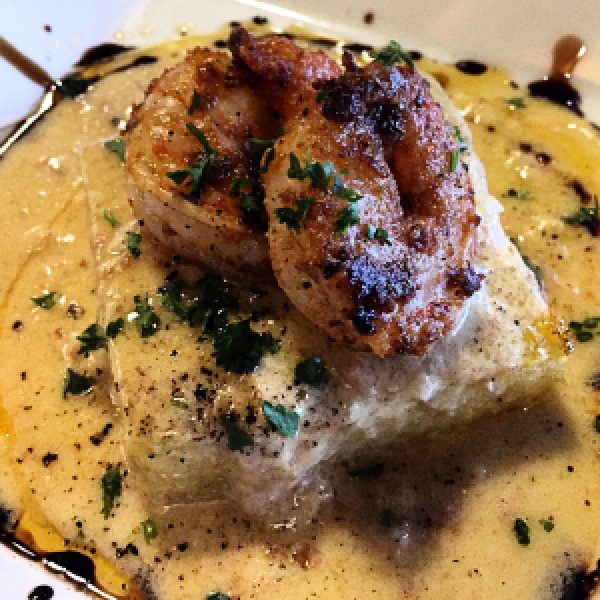 Here’s a little tip on polenta from a southern boy — it’s grits.  And grits, well, when they are cooked properly, they can be enjoyed with as little enhancement as butter, salt and pepper — I could eat them all day like that.  In fact, if someone told me my last meal on this earth was going to be grits with butter, salt and pepper, I’d probably be okay with it.

But, they also become the perfect textural base and starch foundation for any gravy or sauce that has a medium to bold flavor and richness to stand up to their heavier nature. This Polenta cake and Cajun flavored shrimp tapa was excellent on all levels.  The slightly blackened shrimp had a great spice to them and the Manchego cheese sauce would have been equally at home and the star in a multi-cheese macaroni dish.  Here, combined with the hominy texture of the polenta cake, it created a feeding frenzy – there wasn’t even a smear left in the plate when we finished this. 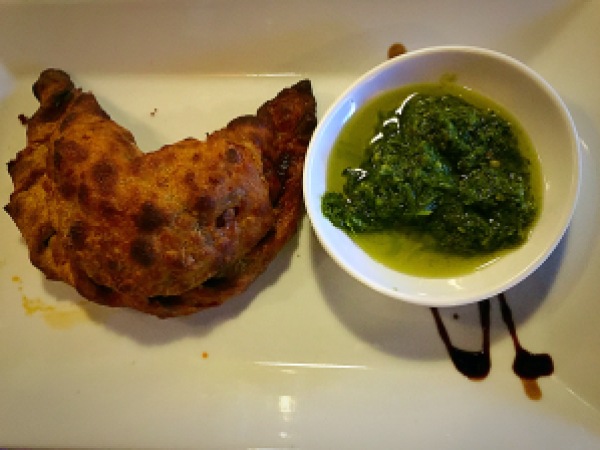 Who doesn’t love pockets of pastry filled with savory meat?  The empanadas here are baked, never fried.  The result is a nice crispy crust with a bit more of a bread texture.  This was the Beef Chorizo version with a refreshing chimichurri sauce accompanying.

The thing about Mole (pronounced MOH-lay), coming from a guy that doesn’t like a lot of sweet on his savory, is that it is a beautiful, deep, rich, sometimes spicy, perfect even if it is sweet, sauce when done properly.  The other thing about it is that it can be hard to find one done properly.  Many times it is too thick, too rich, too runny, too thin, too sweet, not sweet enough — there are so many things that can go wrong with Mole.

The Torta Azteca de Mole dish here contained layers of housemade corn tortillas, shredded chicken, some beautifully roasted serrano chiles for heat, and we added an egg for good measure, turning it into a type of mole chilaquile.  The Mole sauce was spectacular – light and bright on the palate with a citrusy finish that cut through the perfectly balanced chocolate overtones of the sauce.  The serrano chiles were a nice touch, allowing us to bring in some heat as we desired.  This was the top dish of the night.

You would expect the dish named after the chef to be the best dish in the place.  Oz’s Machacada was, at first, not what I would have expected. Heck, look at the picture – looks plain, huh?  It was accompanied by some aluminum foil wrapped house made flour tortillas that, frankly, seemed as though they might be the best part of the dish.

The first mouthful of the machaca was not the juicy, flavorful machaca’d brisket of tradition.  It hit the tongue dry.  And, then…I began to chew.  And then…I shoveled some onto the fresh, hot tortillas and chewed some more.  And the more I chewed, the juicier and more flavorful the machaca got.

I looked at the menu again.  Bingo!  The machaca is pan seared until crispy, meaning all the juice and flavor is locked inside to be released when you choose.  The manner of release is mastication (look it up and get your mind out of the gutter).  Think of this as a bit more of a hash than a traditional machaca and it certainly lives up to it’s Chef’s namesake billing.

The banana bread pudding and caramel coated ice cream dessert was a decadent ending to a delightful tapas meal.    It had the richness and depth of flavor to finish off a meal that had the same characteristics.

Adams Avenue is one of the hot new “strips” for great food and drink in San Diego.  Chef Oz and his fusion menu of Spanish, Argentinian, Brazilian, Mexican and Cajun flavors is part of the reason why.  While we’re doing everything we can to get people into North County to explore our rapidly evolving, award winning food scene, we need to do ourselves a favor and pop on down to San Diego every now and then and cheer these guys on – they’re doing it right.  Cheers, my friends!