I don’t even know if it’s possible to claim a “news scoop” as a blogger, but if it is, I’m claiming one right now — mostly because it sounds cool to be able to say it.  Executive Chef Daniel Barron and Chef De Cuisine Stephen Gage somehow found a few minutes to give me the nickel tour and an inside look at the much anticipated Blush Ice Bar + East-West Kitchen as they are entering the final stages of construction and preparation for opening.

I and most of the San Diego food world have been excited about the opening of this place since it was announced months ago.  After spending a few minutes talking with them and hearing of their menu plans and concepts, I think I’m going to have a coronary — but, wow, if I have it while eating here, what a way to go!

This is not going to be a pretty article.  But, then again, there’s nothing pretty about the final stages of construction.

Located at 555 Market St. on the corner of Market and 6th in San Diego’s Gaslamp, the 7,500 s.f. Blush is the brainchild of owners Taylor Kim and Russ Fukushima, who also own the successful Blush Raw Bar and Lounge in the San Jose area.  With a VIP soft opening scheduled for next week, the official Grand Opening will be July 30th.  Check out Blush’s Facebook feed here for information to win tickets to the soft opening. 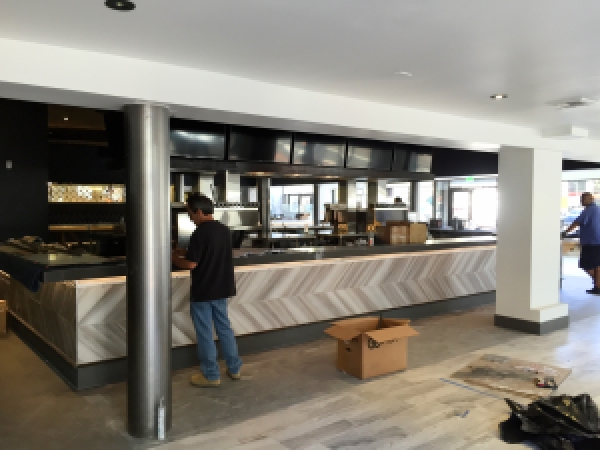 Growing up in Hurricane Alley on the Gulf Coast, the phrase “It’s always calm before the storm” speaks to a strange serenity that takes place as seemingly all noise, pollution and adulteration are pulled from the atmosphere just before the frenetic winds, rain and waves hit the coast.  As a general contractor in my day job, I’m also familiar with the concept that there is always a storm (as in rapidly paced activity, metered frenzy and last minute detail accomplishment) before the calm that comes with completion in any construction project.  Talking with Chef Daniel, I get the feeling this final construction phase is only the “warmer-upper before the Category 5 Grand Opening takes this town by storm”.

Pictured here is the 40 seat main bar, centrally located in the restaurant, currently being used as a storage area, assembly station and general gathering place for the workers and contractors busily moving toward completion. 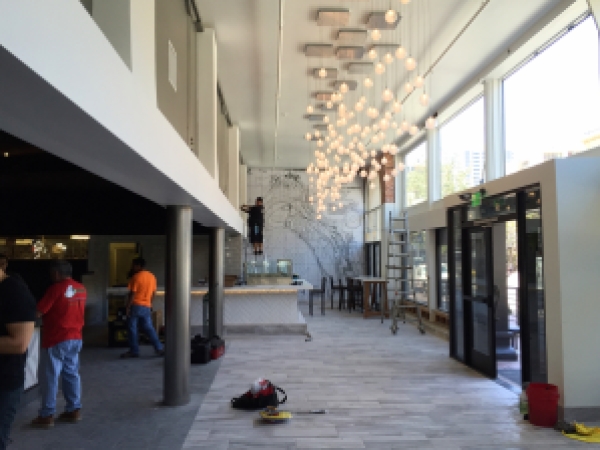 On the Market street side of the restaurant is the 20 seat raw bar.  Finished lighting and flooring is installed and final details are being attended to.  There will also be another 200 seats inside and out available for patrons in addition to the 60 bar seats.

At about the same time that this article is being published on Friday, the final health inspection will have been passed and the kitchen will officially be open and blasting full speed ahead.  Here, a mere 24 hours prior to inspection, cooks, construction workers, vendors, pots, pans and even the light bulbs somehow find a way to coexist in expectant harmony.

Chef Daniel and Chef Stephen have not only a great kitchen to create in, but they’ve put together a great team to work in it.  Many of the new cooks here had positions as sous chefs at other restaurants.  The entire team of wok cooks from the recently shuttered Wang’s in North Park are now part of the Blush family.  There are few techniques or culinary disciplines that are not represented in some shape or fashion here, giving Blush the ability to create and present unique takes on any offering that they plate. 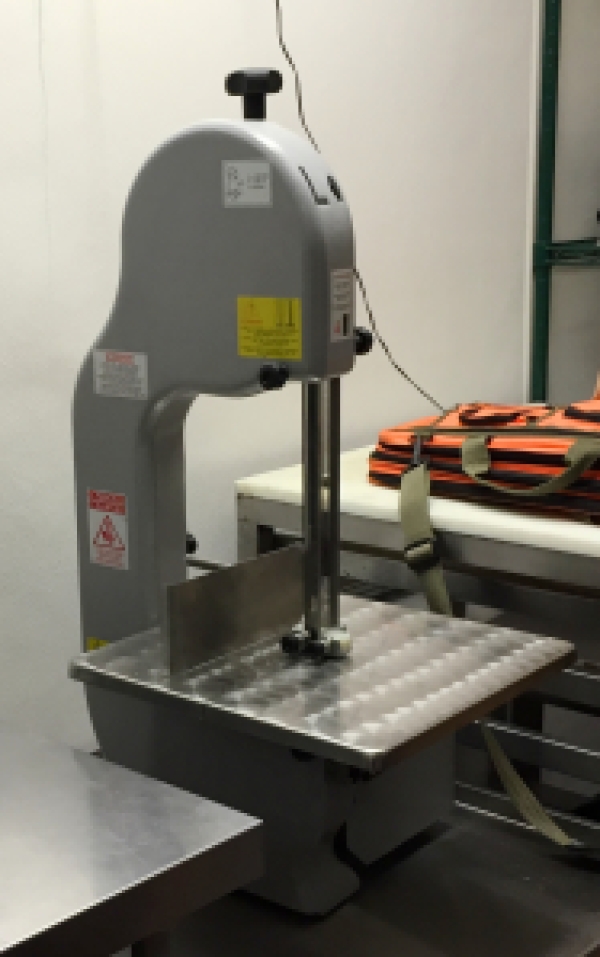 Yes, this is a band saw…but not just any band saw… it’s maybe the most significant band saw in San Diego…

…because it is the bandsaw that will used to slice the house dry aged beef.  Drool over the thought of the steaks that will come from these babies for a moment while we discuss the food and experience that you can expect here.

The Experience — family style dining, with all plates placed in the center of the table for sharing, encouraging a social dining experience.  Portions and prices will be reasonable, allowing for multiple courses to be enjoyed – not the 3 lb. gut bomb spaghetti plates traditionally associated with family style dining.  Items can be ordered a couple at a time or combined to create a complete meal, all at the behest of the diner.

The Food — comfortable, familiar, approachable menu items – 66 of them — prepared in creative and unique fashion.  Traditional Western items such as Steak and Baby Back ribs, Eastern items such as Chicken Lo Mein and Clay Pot Chicken and some non-traditional items such as beef tongue will be served.  Do not expect molecular gastronomy or a tasting menu full of items that you can’t pronounce.  Do expect really, really great food at good prices in a friendly, open environment.

Circling back to “The Steaks” — How about a 28 day dry-aged short loin that will be served as a 3” thick T-Bone for two?  Since the meat hanging here has been aging for 7 days, these will not make it onto the menu for the opening, but I’m thinking that only provides a reason to come back a week later.

If that steak doesn’t get your juices flowing, you’re probably dead.  But, I’ll check your pulse with this one – The Umami Bomb, destined to be the greatest steak in San Diego and headed for world domination.  It is a 21 day dry aged Ribeye, cured in smoked soy sauce and porcini mushroom, then cut, grilled over a wood fire, served with house butter made from dry aged fat, sherry vinegar, butter, garlic and soy sauce and presented with a big chunk of roasted bone marrow on top.

I honestly expect this one to sell out on opening night, meaning it could be another 21 days before you see it again.  Serves you right after what you made me do — I gave away the recipe.  Chef is going to be so mad at me.

In the lower level fermentation room can be found house made Kimchi, soy sauce and miso.  But, I’m not going to tell you how those are made.  You’ve already gotten me into enough trouble.

These next two pictures are really bad because I lifted them from Facebook profile pictures.  Chef Daniel had about 23 people vying for his attention by the time we got to the end of our interview and, well, I suck and forgot to get a picture of the two chefs when I had the chance.

Chef de Cuisine Stephen Gage has the demeanor of a Jedi knight and the top knot of a Samurai.  He strikes me as ever alert and observant, simultaneously attentive and relaxed, seemingly seeing all without looking.  Focused, he is (read that with your best Yoda voice). With 13 years of experience in the kitchen and 4 years as a Chef de Cuisine, including a recently ended stint at La Jolla’s famed La Valencia, Chef Stephen has a reputation as a creative, inventive, fearless chef with a work ethic to match his mid-west Michigan roots.  I would say you should enjoy watching him as second in command at Blush, because the next time you hear his name joined to the opening of a top new restaurant in town, it will be as the Executive Chef.

Also hailing from Michigan, Executive Chef Daniel Barron has an intensity to match his work ethic.  There is little doubt that, under his guidance, the kitchen staff of superstars that he has assembled will run like a finely tuned race car with speed, performance, precision and technology all synchronized to present a dining experience never before seen in San Diego.  Such performance will be needed with the place having the capacity and reasonable expectation of handling about 600 covers a night.

With sixteen years as an Executive Chef including tours at AnQi in Costa Mesa (where because of his menu they were named one of the top ten molecular gastronomy restaurants in America by the Gayot guide),  Blue Point Coastal Cuisine, his own pop up dinner endeavor Evolve and La Valencia in La Jolla, Chef Daniel has extensive experience with everything from progressive molecular gastronomy to traditional and classic techniques of gourmet food presentation.

Yet, from our short time together today, my takeaway is that, technique and technology aside, for chef, it is all about the food.  While talking about the best sources for everything from chicken to vegetables and the difference between grass and corn fed beef in relation to dry aging,  he communicates with charming directness his concern that his future patrons enjoy their dining experience.  As against the grain as it may seem to rub, could it be true that we have a chef in San Diego who actually cares that his food is enjoyed by all, without weirdness or pretentiousness, while still being inventive and creative?

In Chef Daniel, we are witnessing first hand, here and now, a chef whose time has arrived.  He will, by his account, be unshackled for the first time in his career and will be cooking his menu with his style and his hand picked crew.  His encyclopedic repertoire of technique and technology will bring flair, substance and style to comfort cuisine that is much needed and desired in the corridors of the San Diego food world.

Notably, as our interview was winding down, we both ended with the same thought (’cause we’re Bros like that) — that one of the reasons the opening of Blush is so anticipated is that no one knows what to expect.  While there are a plethora of “Hot” and “New” dining establishments jumping onto the scene with well known chefs at the helm, many of them are simply variations on themes and concepts that those chefs have done before.  In Chef Daniel’s case, the opening of Blush will be his coming out party with a fresh new perspective and menu that has not been seen before.

Make your reservations and bring sunglasses, because I don’t think you’ll want to miss a moment of the ascent of this brilliant, rising star.  Cheers, my friends!